Continuing Conversations on the Human Spirit

WALK AT ALL IN MY SHOES

The summer of 1966 was a life changing experience for me. The Wesley Foundation (Methodist Student) group that I have been a member of for four years while attending Sam Houston State Teachers College ( in those days) chose to take a summer mission trip to Old Mexico, as we called it, near Puebla Mexico. On this particular trip we ran into political issues that we were unprepared to address, and had to be retrieved from the village we were assigned to by a riot squad of police who safely extracted us from the troubled village where the fears of the people had gotten out of hand in regard to what we might do among them. We were simply digging latrines and working playing with the local children, no theology involved. But they had been stirred up by some local villagers who did not want to see us there and thus our lives were in danger until we were rescued.

Following the incident we were carefully taken to Pueblo where we stayed with a group of nice Methodist folks who treated us royally for three days until we could be reassigned. We were then assigned to a village west of Pueblo called Atlisco. In town there is a local market that sold many items that inchanted me. One of them was Mexican sandals made from car tires and leather. I found a merchant that was willing to design and make sandals the size of my rather long 12″ + foot and would measure them to fit. When I returned to get the sandals, however, I discovered that they were made from truck tires instead of automobile tires and they were enormous. A little boy that was watching the whole proceedings, me sitting and trying on this aircraft carrier size footwear, got tickled and wanted to try them on himself. The picture is of the little boy and me sizing his feet in my sandals. 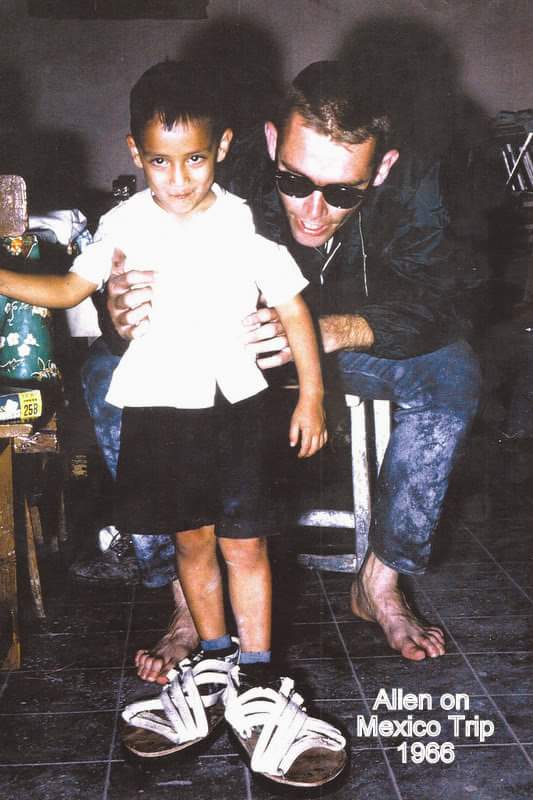 Raised in Huntsville, Texas. Cloistered in the segregated south. Recieved undergraduate degree in Music Education; Graduate degree in Theology, Perkins School of Theology, SMU Dallas, Texas. Served churches in Texas and Colorado. Was a Minister of Education for many years, then adjunct professor at The Iliff School of Theology, then Director of Youth and Camping Ministry and Church Leadership Training for the Rocky Mountain Conference. Prior to retirement was pastor of the Fruita United Methodist Church in Fruita, Colorado (west of Grand Junction). Now retired and living in Grand Junction where I drive a Grand Valley Transit Bus and play. Passions are poetry, music, religious and spiritual study, hiking, photography and and 4 wheeling. I love western Colorado. The varigated landscape of Mountains and Canyons, streams and rivers calls to something deep in my soul. I am passionate about religion without being religious. I live on the border of doctrinal faith, seeking the connecting spiritual links between all persons..

2 thoughts on “WALK AT ALL IN MY SHOES”