Continuing Conversations on the Human Spirit 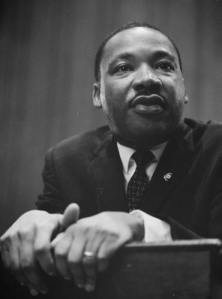 It was November 1964. I was a Sophomore student at Sam Houston State College, in Huntsville, TX. I received an invitation to travel with a friend to the national convention of the United Methodist Student Movement in Lincoln, NE.

I must admit that the trip interested me because  I could ride in a new Corvette Stingray from Huntsville to Lincoln. It was a dream trip. The destination actually took back seat (and there was only a tiny one in the Stingray). We whizzed across the country as speeds  just under the radar. Pulling into gas stations people would gather to look at the car and I would feel pride as I climbed out of the bucket seat.
Too soon however we arrived in Lincoln. I had never been to a large convention before.  The numbers of students from across the county and the size of my church’s reach impressive. It was a challenging program of speakers addressing us as potential future leaders.
There was a surprise keynote speaker planned for Thursday of this five-day conference. There were rumors that it would be someone famous or important in world affairs, but nothing was announced. At the close of the Thursday morning session, we were told that special precautions were in place for the afternoon Keynote Speech. We all had to be there fifteen minutes early. We were to bring no materials with us as they would be confiscated at the door. There would be the necessity for absolute security.
Of course the preparations heightened curiosity and excitement. Who could this speaker be?  Finally time for the afternoon keynote arrived, the atmosphere was electric. The three thousand participants gathered in an orderly fashion under the watchful eyes of Lincoln Police and the Nebraska State Patrol. The master of ceremonies advanced to the microphone and began an introduction of the afternoon speaker. It was the Reverend Doctor Martin Luther King, Jr.
This speech literally changed my life and appreciation for the role that Christian people were attempting to play in racial justice. I returned from the conference and reconnected with my studies.
In my Senior year the SCLC (Southern Christian Leadership Conference) arrived in Huntsville to orchestrate a series of sit ins in the local restaurants. I was President of the Sam Houston Wesley Foundation (Methodist Student Ministry). Members of the student body of Perkins School of Theology arrived in Huntsville to join in the demonstrations. Envoys invited the Wesley Foundation to challenge the students to become involved. We declined direct involvement, but covertly supported the cause publishing necessary fliers and bulletins  in our printroom. In a few days I was summoned to the President’s office and summarily told to discontinue involvement. I refused. I was told that the President, a long time personal family friend, would, “close the damn thing down if I persisted.”
Taking the threat to my board, involvement was to discontinue. Some of us continued support even further under cover, but were seen as deserters by Perkins Students who were on the front lines.  Eventually, though the administration became aware of my involvement as limited as it was and my father’s job was threatened. A heated dinner conversation with my dad, brought all to the surface. I ceased involvement.
Upon graduation, I entered Perkins School of Theology and was confronted by some of the students that had worked in Huntsville opening the lunch counters. Throughout the first semester, cafeteria encounters and discussions opened my understanding of the problem of segregation. Other students were involved in demonstrations in front of Dallas WHITES ONLY establishments.
I joined the cause. Those picket line experiences opened me even further to the problem of entrenched racism and gave me the opportunity to talk with owners and discuss from the standpoint of peaceful resistance the issues we were rasing.
To hear the transforming speech of Dr. King, CHECK HERE.

Raised in Huntsville, Texas. Cloistered in the segregated south. Recieved undergraduate degree in Music Education; Graduate degree in Theology, Perkins School of Theology, SMU Dallas, Texas. Served churches in Texas and Colorado. Was a Minister of Education for many years, then adjunct professor at The Iliff School of Theology, then Director of Youth and Camping Ministry and Church Leadership Training for the Rocky Mountain Conference. Prior to retirement was pastor of the Fruita United Methodist Church in Fruita, Colorado (west of Grand Junction). Now retired and living in Grand Junction where I drive a Grand Valley Transit Bus and play. Passions are poetry, music, religious and spiritual study, hiking, photography and and 4 wheeling. I love western Colorado. The varigated landscape of Mountains and Canyons, streams and rivers calls to something deep in my soul. I am passionate about religion without being religious. I live on the border of doctrinal faith, seeking the connecting spiritual links between all persons..